28th November 1988: BBC News reported news of a "major battle" between rebel Guards forces and loyalist troops from the Parachute Regiment in the area around the Catthorpe Interchange where the M6 motorway joins the M1.
The battle lasted most of the day before the Paratroops withdrew having inflicted heavy casualties on the Guards. Prime Minister Cranwell praised the "loyalty and honour of the Parachute Regiment in fighting for the maintenance of democracy in England".
Posted by Steve at 8:31:00 pm 6 comments: 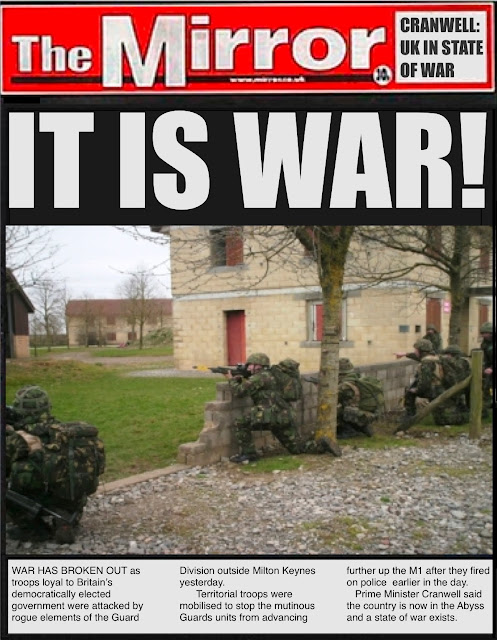 27th November 1988: Prime Minister Cranwell announced to the nation that "a state of war now exists in Britain" as the Guards Division attacked and defeated Territorial Army units outside Milton Keynes positioned to block their advance up the M1. Cranwell appeals to other army units to "remain loyal to the democratically elected government and not dishonour their traditions by deserting to support the old establishment elite".

I've been thinking a bit further about ideas for gaming in this background and have decided that initial battles in the late '80's and early '90's will probably be in 10mm as I really like the look of Minifigs N scale range, however as England collapses into chaos in the early 21st century I have decided that it will not be possible to resist the lure of 28mm...

Whilst I envisage the Royalists controlling large swathes of Northern England, there will be Republican hold-out cities such as Liverpool and Sheffield, under almost constant siege. This would mean that the Republicans would need to supplement their garrisons with militias and inspired by the VBCW Red Workers Militia Unit on Jim's Wargames Blog I've ordered some Chechen troops from Red Star Miniatures which I think will paint up well as a group of "Bolshie Scousers" (anything too Chechen will need removing and I will look to replace some of the Russian weapons with British and American ones if I can find a good source).
Posted by Steve at 4:22:00 pm 4 comments:

As the country is poised on the bring of civil war I've taken a quick breather to consider gaming the conflict. The original idea was to use my old 20mm moderns and this still is a primary driver, but as I've been developing the background various other ideas have occurred to me. 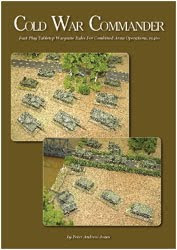 First off, with the Guards moving up the M1, is using Cold War Commander. I bought a set a while back to allow me to use my 6mm Soviets, possibly in Afghanistan but it occurred to me that some of the larger 2ECW battles with adhoc battlegroups would be a lot of fun (especially as I like tanks!). As I only have Russkis in 6mm I am pondering whether to go 10mm which will allow more character to the forces or maybe the other end of the spectrum with 3mm... 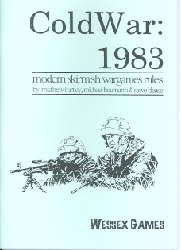 For small scale infantry actions I intend to use ColdWar: 1983. Mike Baumann did a great job converting Panzerfauste to modern infantry combat and I love the GUTS mechanism which recreates the 'friction' of combat so elegantly.
Skirmishes between regulars, territorials, militia, para-militaries and foreign volunteers in 28mm are very, very tempting especially with some of the excellent 28mm moderns on the market. 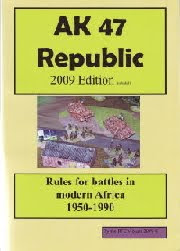 Another idea is to use AK-47 Republic. This may seem a bit weird but I envisage that the infrastructure breakdown across the UK will be pretty extreme in part. Not quite Twilight 2000 but not far off in parts.
The political element of the game may also suit what I am trying to achieve with a lot of ideologically motivated troops of varying military ability. I haven't got a copy so will need to pick one up sometime soon... 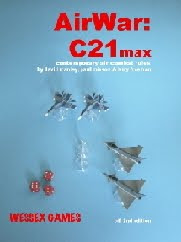 Finally when considering the split in the Army I was pondering the response of the RAF. For the most part I anticipate the (newly renamed) Republican Air Force will remain loyal to the government, although there will be elements that join the rebellion and of course, foreign volunteer forces (how can I resist the idea of A-10's flying over our "Green And Pleasant Land"?).
Obviously I will plump for AirWar: C21 here.
Posted by Steve at 10:40:00 am 6 comments: