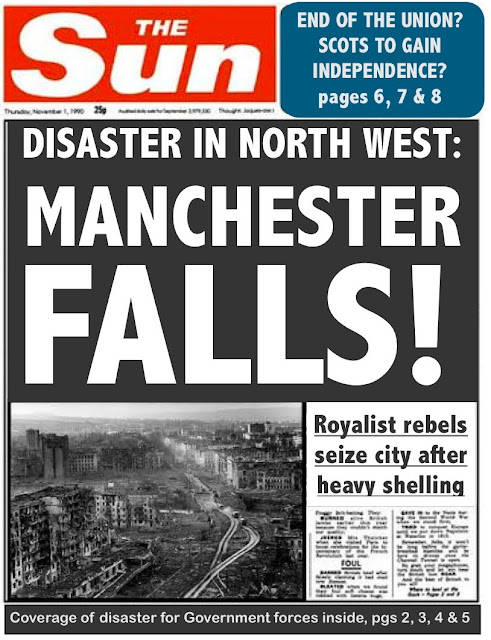 13th December 1988: In some of the bloodiest fighting of the civil war to date, Royalist army units managed to seize control of Manchester from Government forces.

Intense artillery bombardments and air strikes from rebel Royal Air Force units reduced much of the centre of the city to rubble before rebel troops engaged Republican units in the ruins of the city.

The operation to clear Manchester of Government troops was claimed to have only taken a week by the Royalist high command although sporadic skirmishes across Manchester continued well into 1990.
Posted by Steve at 10:54:00 pm No comments:

10th December 1988: In an effort to counter the propaganda being issued by the government controlled television media, the Royalist forces launched their own television news channel broadcasting to areas under their control.

Initially Sky News offered a reasonably balanced approach to its bulletins but as the war continued it effectively became a propaganda tool of its own masters toeing the Royalist line in its reports.
Posted by Steve at 8:45:00 pm No comments:

The Mayor of Birmingham called for calm and declared that Birmingham and the surrounding region would "remain independent of the warring factions hell bent on plunging over the abyss".
Posted by Steve at 8:38:00 pm 1 comment:

7th December 1988: BBC Scotland reported that Prime Minister Cranwell had opened discussions with Scottish National Party leader Gordon Wilson about moves towards Scottish independence in return for direct involvement on the republican side in the civil war spreading across England.

At this time Scotland had largely been unaffected by the descent into war south of the border with military units based in Scotland maintaining a neutral stance.
Posted by Steve at 8:27:00 pm No comments:

6th December 1988: Canadian television reported that rebel British Army generals had approached the Prince of Wales with a view to him assuming the crown following the abdication of the Queen and becoming a figurehead for disparate anti-republican elements in Britain to rally against.

The Prince was concerned that such a gesture would potentially inflame the situation in Britain and declined the approach, as did the Duke of York.
Posted by Steve at 8:19:00 pm No comments:

Like many wargamers I like to try and get multiple use out of scenery and have plans to use some vac-form plastic ruined buildings from Amera and change their identify by using signs mounted on thin magnetic strip so they can be used in 1945 Berlin or some 40K battlefield with a switch of identity. Obviously a few contemporary British signs will also allow the battle damaged ruins to represent the streets of Liverpool... 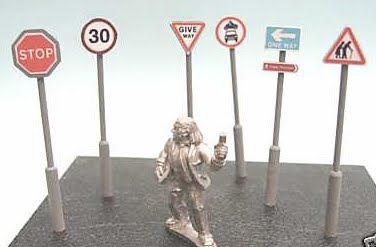 To supplement the ruins a few other period specific scenic items would help tie the battlefield into what it is supposed to represent. Somewhat fortuitously (especially as I was looking for suitable Victorian looking resin bases for a couple of Holmes and Watson miniatures) I stumbled across Fenris Games who do lots of really interesting stuff including a range of 'Street Furniture' including rubbish skips, phone boxes, road signs, street lamps etc etc. Ordering the bases I wanted I've added a couple of items from the modern range to the order which should prove very useful in setting the scene and adding flavour to any games...
Posted by Steve at 10:49:00 pm No comments:

My Killer B order arrived today and although they are a little bit chunky, in a fit of enthusiasm I started converting three of them to sport SA80's, replacing arms and hands as necessary. Allowing the Green Stuff to dry I had a quick look at TMP and swore...

Urban Beat Miniatures have just released their first miniatures - 28mm modern British police with guns! The figures are nowhere near as caricatured as the Killer B ones and look like they will fit in a whole lot better with Red Star and TAG. I've ordered a pack of the Armed Response Unit and a pack of the CO19, now I need to work out what to do with the Killer B conversions...
Posted by Steve at 8:12:00 pm 2 comments:

Following on from the TMP thread on England Prevails I came across this battle report inspired by the blog at the Gentlemen's Wargame Parlour with an SAS assassination attempt on Prime Minister Cranwell (the photo below is taken from the report).

Many moons ago I recall watching some survivalist drama on TV and one of the shots had a Traffic Warden sporting an SLR manning a baricade. I have no idea what the programme was but the image has stuck in my head ever since... Considering the breakdown of society during the war it is easy to envisage any uniformed authority having some form of martial responsibility, even if only to keep civilian population areas under control and guard important resource centres from terrorists and para-military/militia types. 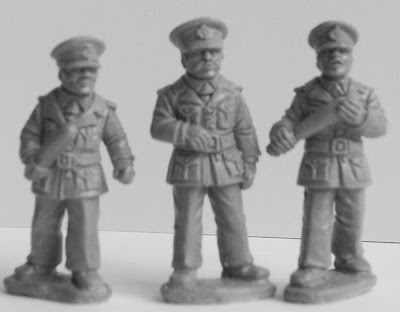 Obviously local police forces would need to be armed to undertake these duties and who knows maybe traffic wardens! :-) Miniatures wise I have ordered a small group of British police from Killer B Games from their Geezers range which I intend to replace truncheons with SA80's. I'm not sure how useful this range will prove, I want it to but the sculpting does not look anywhere near as good as the likes of Red Star or TAG. Hopefully they'll look better in the flesh as I would like to use some of their masked raiders for NUM flying pickets.
Posted by Steve at 11:29:00 pm 2 comments:

When considering some 28mm skirmishing I really hadn't thought of the problem of civilian vehicles. I want some cars and vans to transport militia or be burnt out scenery but where from. I had it in my head to pick up some old Dinky or Corgi models off eBay but having had a quick look for a Transit am stuck on the issue of scale (ie. what scale to use and what scale are the models anyway?) and what model Transit is appropriate (I'd forgotten how much they'd changed over the last couple of decades - and whilst I can tell the difference between a PzIV Ausf D and a PzIV Ausf H, buggered if I know anything about Transits). 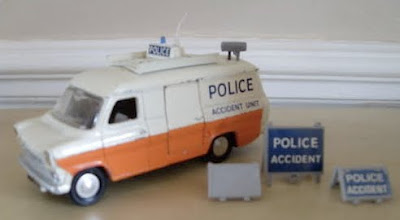 On the subject of scale having looked at the comparison table on Big Lee's blog it looks like something from 1/48 to 1/56 would be ok, especially when the miniatures are based as this will increase their height, but I am going to have to be fairly consistent and if I go 1/48 make sure that Transits don't look more intimidating than 1/56th Saracens. As for what model of Transit to use I suppose I'll have to do some online research even if the thought of researching Ford Transits makes me feel very nerdy...
Posted by Steve at 6:33:00 pm 1 comment:

4th December 1988: Local news stations provide first reports of a series of major battles that occurred in Tyne & Wear and Teeside as rebel forces push north-east to seize the North Sea ports. Fierce fighting continued throughout December as the government forces lost control of much of the region including Newcastle-upon-Tyne and Middlesborough. By the end of the month Hull was the only major port on the North East coast of England still under government control.
Posted by Steve at 3:16:00 pm No comments: 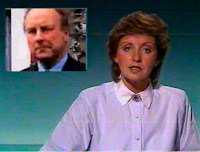 2nd December 1988: BBC News reported that British National Party leader John Tyndall had created an extreme right-wing militia called Spearhead to "protect English society" against the "anarchy sweeping the country". Details of the size of the militia vary from 200 to almost 2,000 with units across the country operating independently and often at the agenda of their own local commander. Spearhead's military impact at this time was extremely varied and the militia gained a reputation as much for committing racially motivated atrocities as it did for military action.
Posted by Steve at 2:44:00 pm No comments:

1st December 1988: Local news stations reported a decision by Birmingham City Council to declare Birmingham an "open city" and a "demilitarised population centre" in an effort to not become embroiled in the increasing violence sweeping across the Republic of Britain. The Republican Government responded by declaring the move illegal and the Home Office issued orders to West Midland Police to arrest the ring leaders.
Posted by Steve at 2:36:00 pm No comments: