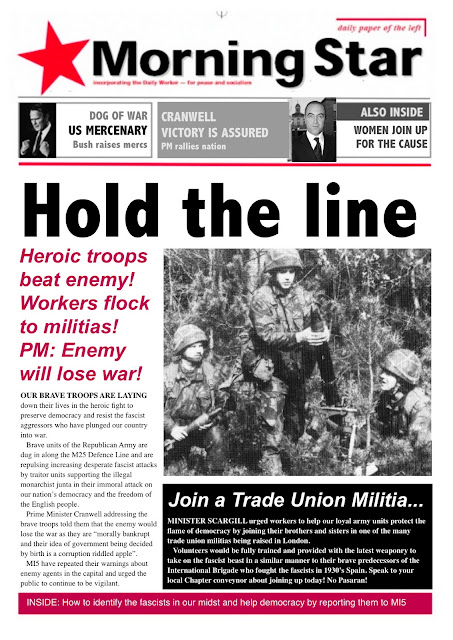 24th January 1989: the Hampshire Regiment supported by elements of the 3rd Republican Tank Regiment repulsed a heavy Royalist probe on their positions near Epping.

Royalist forces including the 1st Royal Tank Regiment, Royal Welch Fusiliers and Duke of Wellington’s Regiment launched a dawn attack on the Republican defence line in an attempt to follow up on their earlier successful attacks.

Fierce fighting around Barber's Wood and Theydon Mount saw heavy casualties on both sides, the Royalist attack being finally beaten off with the timely assistance of Republican Air Force Harriers operating out of Stapleford Aerodrome, despite it being targeted by Royalist artillery. 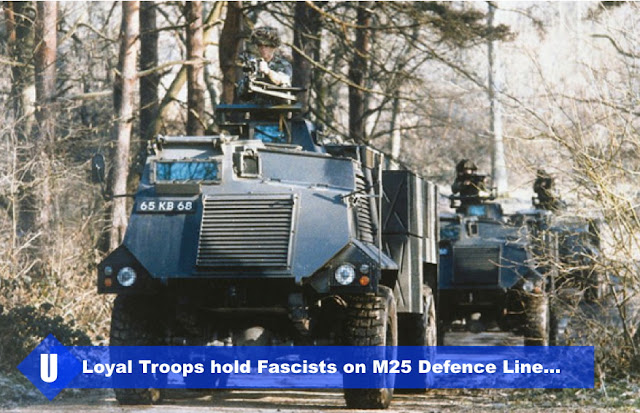 21st January 1989: The Republican Army swiftly moved reinforcements from west of London to the M25 Defence Line in a last ditch attempt to stem the Royalist advance. Units from the Gloucestershire Regiment along with the Light Infantry took up defensive positions on the line alongside Militia Units and ad hoc Composite army units comprising of troops who had fled the Royalist advance. To the north the Royalist Army continued to sweep up any remaining pockets of Republican resistance before consolidating  in preparation for the final stages of Operation Teal to capture London.
Posted by Steve at 9:39:00 am 1 comment: 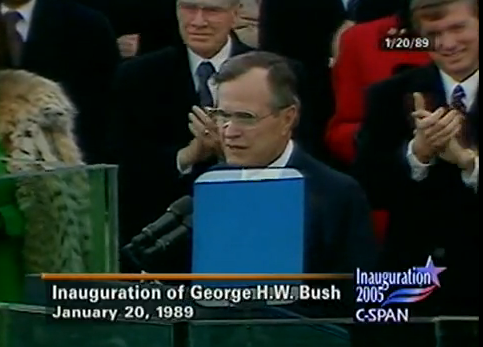 20th January 1989: In his inaugural address, George H.W. Bush, the 41st President of the United States, authorised the raising of an American Volunteer Group to serve in the United Kingdom if required. Both Bush and his predecessor Ronald Reagan were increasing concerned at the civil war in Britain and the potential threats of both French involvement in England and Soviet intervention in Northern Ireland. Whilst unwilling to have the United States become embroiled directly in a conflict that potentially could expand globally, the sanctioning of a volunteer force organised by the United States government was regarded as a proportionate response to the threat and risks posed.
Posted by Steve at 12:01:00 am 2 comments: 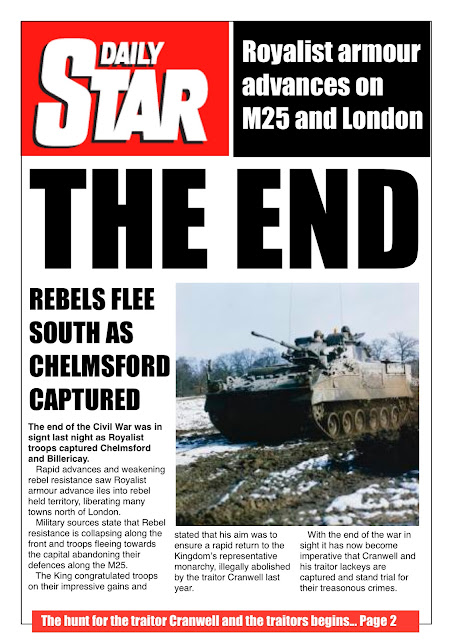 19th January 1989: Republican troops fell back on the M25 defence line as Royalist troops captured Chelmsford and Billericay in 48 hours of fierce fighting. The Blues and Royals led sweeping advances into rebel held territory as Republican Territorial Army and Trade Union Militia units were swept aside.
Posted by Steve at 10:07:00 am 1 comment: 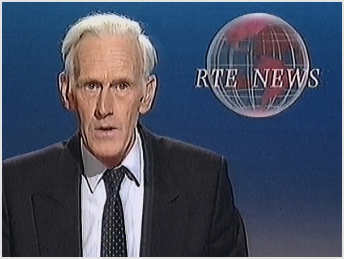 18th January 1989: RTE News reports on escalating violence in Northern Ireland with bitter fighting between Royalists, Republicans and Nationalists occurring in Londonderry. Taoiseach Charles Haughey expressed his concerns in the Dáil that the violence in both Ulster and England could spread into the Republic and stated that the Óglaigh na hÉireann, with the help of their Soviet advisors, would ensure that the nation was protected "whatever means necessary" to ensure this did not happen.
Posted by Steve at 9:09:00 am No comments:

First off apologies for the lack of updates of late, no plan survives contact with the enemy, especially when that enemy is real life, however I hope to get back on track with 2ECW soon. In the meantime I thought that this post for painting British armour, off the excellent Cold War Hot Hot Hot blog, worth passing on if you missed it.
Posted by Steve at 1:14:00 pm 1 comment:

Looking for some inspiration for my Whirarwistan project I came across this excellent (and cheap) tutorial on constructing bombed out high rise buildings on Doctor Merkury's Lab. Whilst these have been made with the Lebanon in mind they would be perfect for any bombed out cityscape like Liverpool in the 2ECW (and they could be used for other 28mm games such as WWII and 40K). Inspiring stuff, all the Modern Wargaming labelled posts are worth looking at... 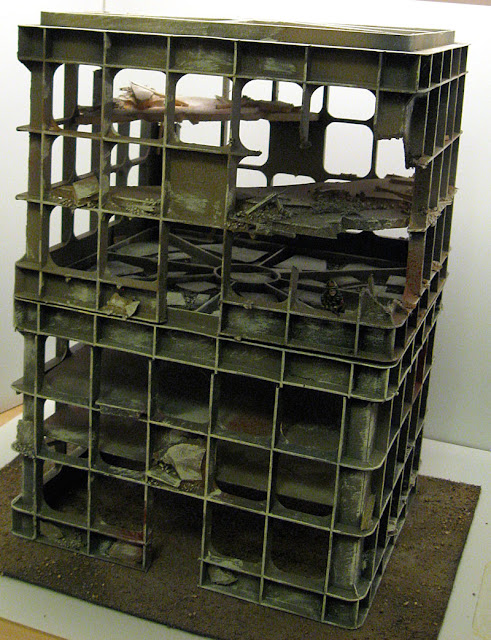 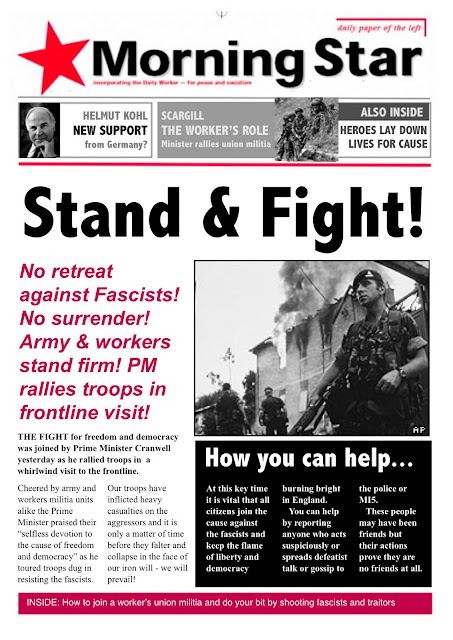 17th January 1989: Republican resistance grew stronger as the Royalists continued to advance in Operation Teal. After a day of bitter hand to hand fighting the Gurkhas captured Stansted Airport from elements of the Republican Parachute Regiment and The King's Regiment began advancing along the A1060 London Road after clearing Bishop's Stortford of enemy troops. To the east Royalist armour captured Maldon before swinging back along the A12 cutting Republican forces in Chelmsford off from reinforcements.
Posted by Steve at 10:00:00 pm 3 comments: 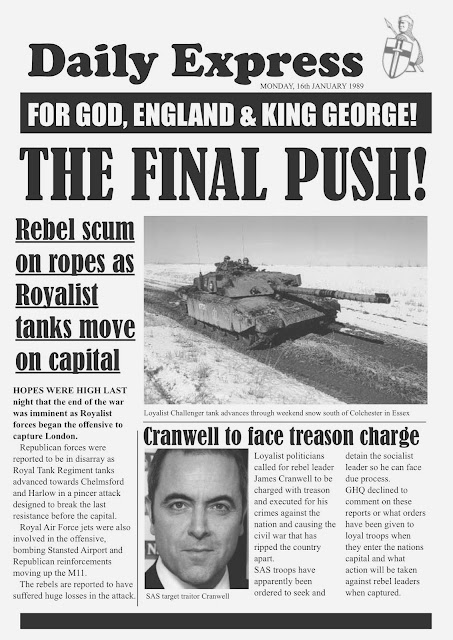 16th January 1989: Royalist forces commenced Operation Teal, the offensive to capture the capital and smash the Republican movement. Following an intensive artillery barrage and air strikes on key targets, Royalist armour and troops commenced a two pronged pincer attack with one thrust attacking towards Bishop's Stortford and the other towards Chelmsford. Despite fierce Republican resistance the Royalists had invested Stansted and captured Witham by the end of the first day of the offensive.
Posted by Steve at 10:12:00 pm 3 comments: 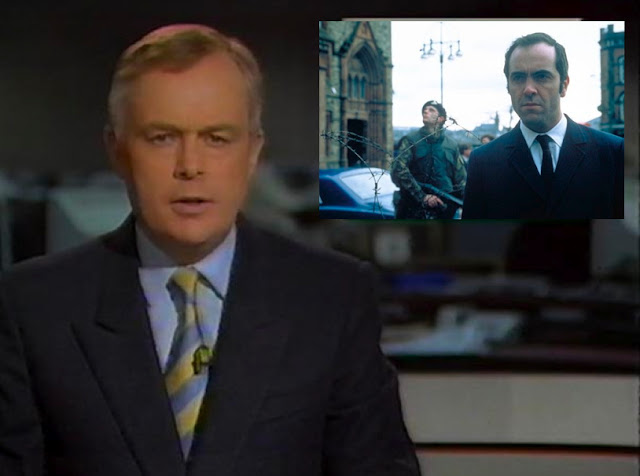 The speech criticised "the forces of the Monarcho-Capitalist oppressors who would snuff out the light of democracy in England, a light that has shone as a beacon for the world for a thousand years" and promised that "our struggle will echo through history and we will emerge victorious from England's darkest hour with the torch of democracy shining brighter".

With the final Royalist offensive on London expected within days, the Republicans rushed militia and para-military units to the frontline to bolster the Republican army and territorial units.
Posted by Steve at 10:04:00 am No comments: 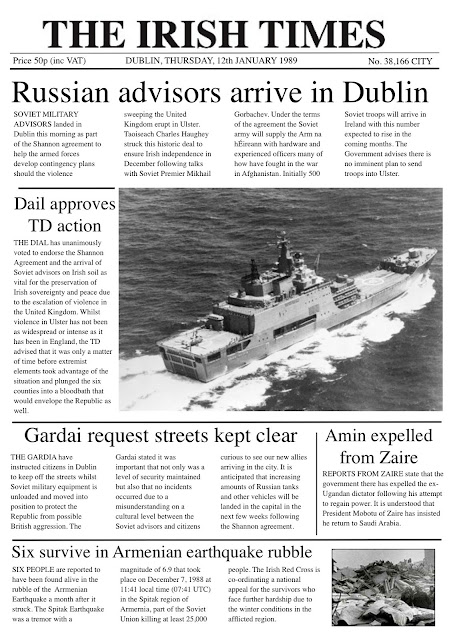 12th January 1989: 500 Soviet advisors and numbers of tanks and APC's were landed at Dublin Harbour as part of the Shannon Agreement signed between the Republic of Ireland and the Soviet Union in December 1988. The Soviet forces arrived to beef up the Arm na hÉireann following increasing concerns in the Republic that the civil war in Britain be used by extremist elements in Ulster to further their agendas and would inevitably spread into the South as political control from England disintegrated.
Posted by Steve at 10:26:00 am 1 comment: 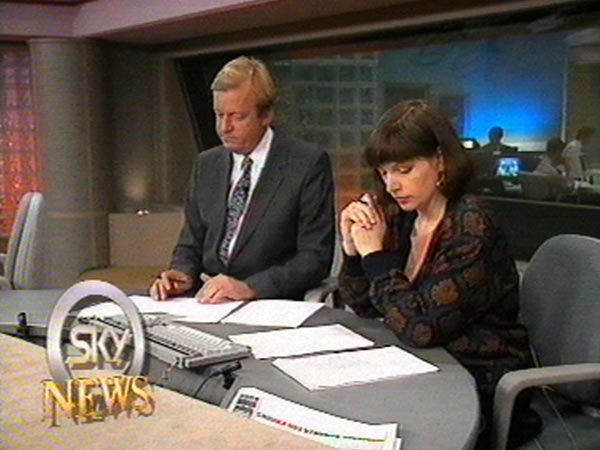 The Household Cavalry Regiment supported by the Green Howards and Royal Welch Fusiliers smashed through the Republican defensive line held by elements of the Worcestershire & Sherwood Foresters Regiment and Territorial London Regiment, troops from the latter defecting to the Royalist side during the battle.

Republican reinforcements were moved swiftly to Chelmsford to protect the capital from a swift enemy thrust down the A12 axis and troops in Saffron Walden withdrawn to Bishop's Stortford to prevent them being outflanked.
Posted by Steve at 6:38:00 pm 3 comments:

First off apologies for the lack of updates on the blog. This year, as you may have seen on my Bleaseworld blog, I've been trying to focus my wargaming activities into specific topics each month. Whilst this has been quite productive from an Ancients, WWII and RCW point of view, there was never an intention to forget to keep England Prevails ticking over.

However the good news is that the Royal Wedding and Amazon's 43% off the rrp offer on Force on Force has seen the juices starting to flow again. Largely this is down to Force on Force which has rekindled my interest in moderns and not only kickstart this project but also embark on a parallel late 1980's Cold War clash between the US and USSR in far off Whirarwistan.

If you haven't checked out Force on Force I highly recommend you do so. It is a very flexible system allowing you to fight different types of battle between regulars or with regulars against irregulars in a very small areas (two foot square table recommended for 15 and 20mm). Perfect for either the streets of Liverpool or some mud brick hovel in Whirarwistan.

Also, as part of my theme focus months, May is "moderns month" in Bleaseworld and I plan to not only paint up some troops for Whirarwistan, but also some of the 28mm's I bought for the planned FIBUA games in the 2ECW.
Posted by Steve at 3:34:00 pm 3 comments: