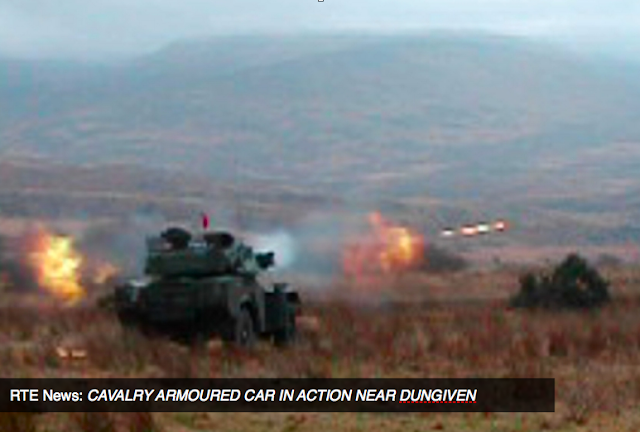 6th February 1989: RTÉ News reported that fierce fighting had occurred as Irish Defence Forces advanced east as part of a plan to establish a safezone outside of Derry.

The reality of the situation was that Taoiseach Charles Haughey had decided to take advantage of the situation in Britain to seize the Ulster and reunite Ireland. Claiming that the invasion was a peacekeeping mission was a smokescreen that few believed, especially as the Irish Army became embroiled in fierce fighting in the days following the relatively bloodless capture of Londonderry.

Three Battalions of the Ulster Defence Regiment; the 5th (Londonderry), 8th (Tyrone) and 7th/10th (Belfast), dug in in the rough countryside around the town and fought off a number of attacks by the Irish forces attempting to seize control of the A6 main road that would facilitate an advance on Belfast.

Despite the Irish Cavalry Squadrons employing Panhard AML armoured cars, the UDR, utlising Carl Gustav recoilless rifles were able to thwart the Irish plans.
Posted by Steve at 12:16:00 am