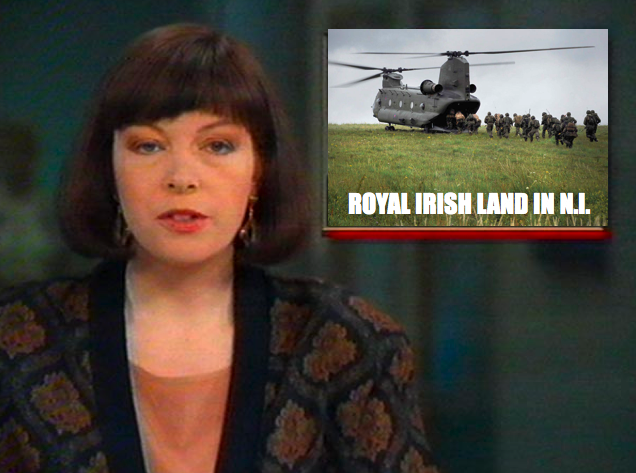 8th February 1989: Landings of Royalist "reinforcements" in Ulster were reported on Sky News to "assist in the efforts to repulse the Southern aggressors".

The U.S. Government had made clear its concerns about the Soviet presence in the Republic of Ireland and saw the invasion by the Irish Army as the first step towards the whole island falling under Moscow's influence. However, given the sentiments of many in America, President Bush regarded  it as political suicide to provide U.S. troops to aid the British against the Irish Republic's army (even if it was, in his view, a Soviet puppet).

To this end he negotiated a quid pro quo with the Royalist government, offering to expedite the provision of American Volunteer Group forces to England, if the Royalists would help repulse the invasion of Ulster.

The 1st Royal Irish Rangers were airlifted to positions north of Belfast seizing control of the M2 and M5 motorways, with the 2nd Royal Irish landing to the south occupying the M1 and other routes from the south. With most units of the Ulster Defence Regiment already engaging the Irish army or taking positions along the border with the Republic, very minimal resistance was met from some Constabulary Forces and quickly suppressed. Special Forces units took control of key points in Belfast, notably the port facilities allowing for more reinforcements to be ferried into the six counties.
Posted by Steve at 12:09:00 am